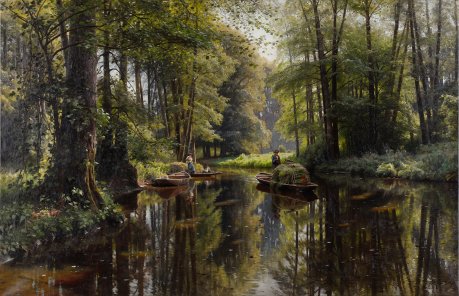 Peder Mørk Mønsted (1859, Grenaa – 1941, Fredensborg) was an important Danish landscape painter at the turn of the century. Following his training at the Academy of Art in Copenhagen from 1875 to 1879, he made numerous study trips abroad. His stays in Italy, Greece, Egypt, and Paris all influenced his work, but Mønsted loyally devoted himself to the Danish and Scandinavian landscape, which he usually depicted being untouched and deserted. Mønsted generally painted forest and river landscapes and created paintings that do not fit into traditional academic landscape painting rubrics..